In order to provide you with the best service possible, we will work with you to deliver a solution that is custom made for your situation; whether you require written translation, simultaneous interpretation, consecutive interpretation or some combination of those services. For information about our rates please "Contact Us".

Other frequently requested languages include:

Consecutive interpretation generally occurs where simultaneous interpretation is impractical or where equipment is not available or not desirable. Examples include conference breakout sessions or dignitary escort. For more information "Contact Us".

Clients frequently require our services to translate a variety of document types.

Past written translation projects have included: conference materials, business documents, reports, manuals, technical specifications, marketing collaterals, press materials and the list goes on. To learn more about how we can help you meet your documentation needs, "Contact Us". 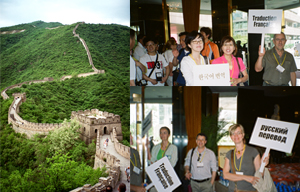